Everyone is talking about WhatsApp and their new policy update which users must accept if they want to continue to use the popular messaging app. This new update allows WhatsApp to share some user data with its parent company Facebook. This has spread fear in many WhatsApp users causing them to delete the application and change to another messaging app. 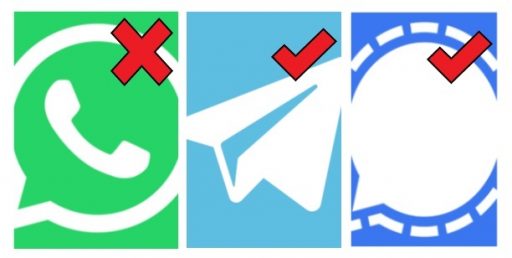 When talking about data collection, Facebook does not have a good reputation and so it is understandable that WhatsApp users are concerned about the new update. The situation has been made worse by WhatsApp because it has not been clear about exactly what the new policy update means. WhatsApp have now confirmed that the content of messages will still remain end-to-end encrypted so that none of Facebook or Whatsapp or the authorities can see this content. However the discussion that has resulted in the media has highlighted that WhatsApp continues to collect a large amount of metadata (such as who sent the message and where and when) from its users. This has caused many people to panic and to change to a different messaging app.

The app that might have benefited most from the WhatsApp policy update is Signal. This is understandable as Signal has many similarities with WhatsApp. Many users have also moved to Telegram. Signal benefits from end-to-end encryption but also there are some issues that users might want to consider when choosing a new messaging app. There are of course other messaging apps that can be found but in this article we discuss and compare these two apps, Signal and Telegram.

In our opinion Signal and Telegram are both good alternatives to WhatsApp. These companies seem to have the trust and respects of their users that WhatsApp now has lost.  Signal offers the best overall encryption and a more similar service to WhatsApp for those users who do not like too much change. However questions remain about funding and US government involvement in the encryption protocol used. Also if you are concerned about your phone number being displayed then Telegram is the app for you. Telegram probably also has overall better usability and the greater number of users means more contacts to message!

We remind our readers to use the official Telegram app and not a Telegram fork (read our article warning about Telegram forks – irancybernews.org/global/1189/). We suggest that readers also be careful of any Signal forks that soon might be created.

The ICNA Telegram channel is t.me/News_ICNA