The Iranian social media app named Rubika is accused of copying peoples Instagram accounts and placing the accounts on its own platform to boost the appearance of its popularity. Rubika is similar to Instagram but designed to work within the parameters for the proposed internal internet program that the government is hoping to get authorized in the legislation called cyberspace users rights protection and regulation of key online services otherwise known as the protection bill.

However, the app so far is not very popular in Iran and users are complaining that despite the free internet access provided to Irancell subscribers the application uses too much internet and struggles to connect to the free service. 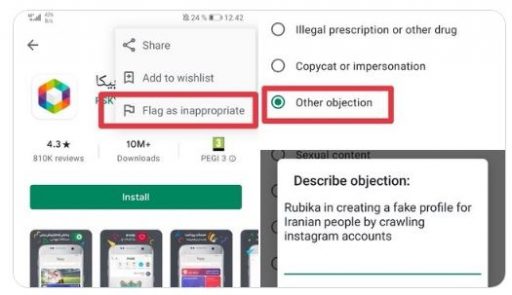 It has been suggested that once the protection bill becomes law the government hopes that Rubika will overtake Instagram as the social media of choice for Iranian in Iran. Whether this will become reality or just a dream of the government is yet to be known as millions of Iranians use and prefer Instagram and many people using it for business.

The source of the scandal

The Rubika scandal first came to light when it was reported that accounts listed on Rubika apparently belonging to famous football players did not actually belong to them. It was first believed that only people on Instagram with lots of followers had been duplicated on Rubika, however when many ordinary Iranians checked their usernames on the app they were shocked to discover that they too had been duplicated.

This has led to many complaining about the app on Twitter with some users giving instructions on how to complain about the app on the Google play store and showing screenshots of themselves doing this. One Twitter user wrote that the app is creating a fake profile for thousands of Iranian people by crawling Instagram accounts. It is not just user accounts that are being duplicated but content also. 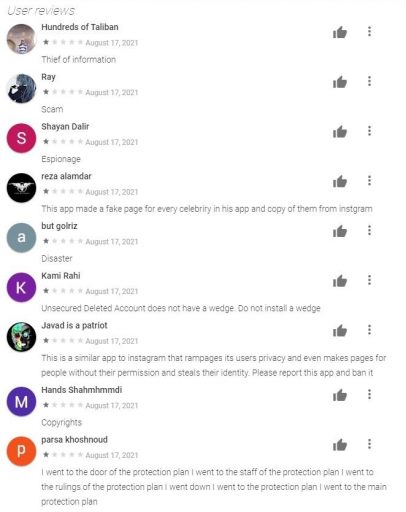 Rubika have said they originally created the footballer accounts after a prior agreement with the clubs involved however this information is widely disputed. Furthermore originally Rubika said that if a user saw a fake profile of themselves they would be be able to get this removed however after this they said they would need the account creators permission to do this who is not the original user! So you can see how in reality it is not possible to get the duplicated account removed.

although it may be common for people to imitate famous peoples accounts on social media, this is not usually the case for ordinary citizens especially in the numbers reported online so far. it feels like this news is not good publicity for the company or the Iranian government if they were hoping that Ruibika would replace Instagram as many people are outraged and will most likely boycott the app in the future because of this scandal.