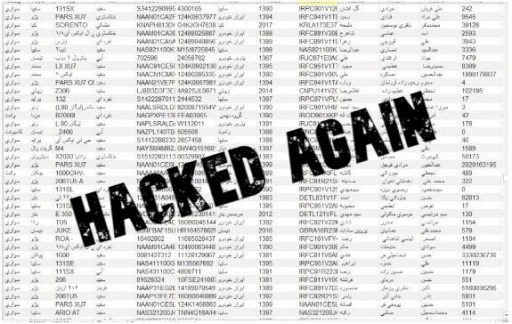 The Telegram channel @NMAToday reported that over 14 million vehicle profiles from within Iran have been leaked from internal servers within the Iranian traffic police (Rahvar) databases.

where the Rahvar leak was discovered

The Rahvar data leak was said to include motorcycles and private, government, public and industrial vehicles. It makes us wonder if perhaps there was sensitive government or commercial assets listed in this leak and some government of private entity decided to pay the hacker their price and thus this is why the post is now unviewable.

The data leak included extremely detailed and private information including plate number, details of the vehicle including color, type, system, as well as personal details of the owner including first and last name, fathers name, birth certificates, owners national ID, birthday, and phone number among many other things. below is a list of column headers that was said to have been included in the leak:

Rahvar leak another piece in an unsettling trend

this is another piece of evidence in the growing pile of cases where hackers who are successfully hacking Iranian state institutions and departments. Some of the hackers have been simply looking for a quick sum of payment, and others are overtly political in why they are attacking but look at these incidents together paints a worrying picture for Iran. The country is increasingly positioning itself as a target who is full of holes and easy to attack.

In our previous article we outlined the clear direction that hacking in Iran is increasing. Some of it is due to people simply needing to make a living and much of it is suspected to be sponsored by the state however the question that needs to be asked is whether the Iranian regime is equipped and prepared to meet the push back that comes with hacking on an international level? when we look at the recent hack of the national rail system, the hack of Evin prison announced just today, and now this massive data breach of the traffic police database my dear readers it appears the answer to the question is no Iran is not prepared to face the consequences of its actions.