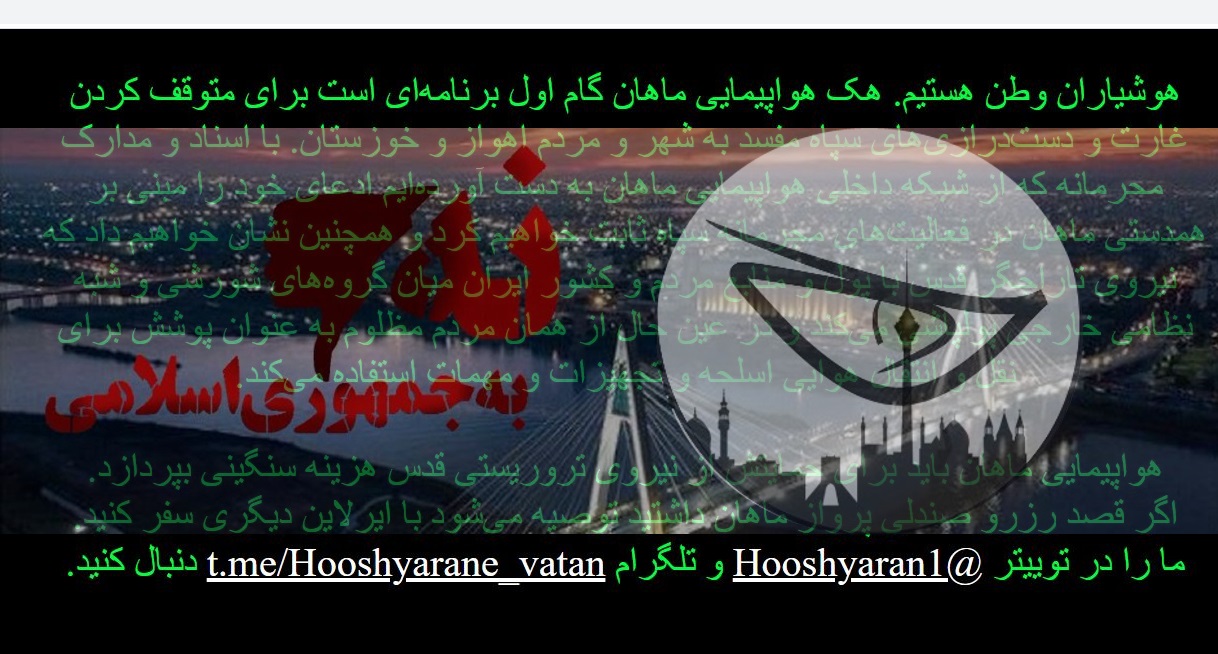 On Sunday 21 November a group by the name of Hooshyarane Vatan released a statement on their Telegram channel claiming responsibility for the hack of Mahan Airways, describing the illegal practices of the airline in aiding the IRGC Quds force activities across the region.

The group claims to have infiltrated the network and have taken many documents and evidence exposing the illegal activities of the IRGC-QF with the help of Mahan Airways but this being so the Iranian state media is still stating there has been no disruption to schedules or service after they detected the unusual activity on their network.

The group claims that Mahan Airways has been cooperating with the IRGC QF and helping them move people and supplies across the region to help the Islamic regime conduct their activities that waste Iranian money abroad while the people at home suffer.

Through the analysis of documents attained from the Mahan Airways network, the group has identified extremely large and vast quantities of passengers listed with the full name “MR. Hamra Hamrah” and sometimes even hundreds of these passengers appearing simultaneously on the same flights.

All of the passengers by this name were found to be booked by the same travel agency which led led the group to investigate further and they foud what they suspect to be a IRGC front company by the name of Hamrah Company and documents addressed to the CEO Mr. Golparast also referred to as sradar Golparast which is a military rank used in the IRGC. This name was identified as a previously exposed IRGC member who is listed as the owner of the Qeshm Fars Air company which is also a well known IRGC front company.

With this mountain of evidence the group has concluded fairly convincingly that it is obvious that the IRGC QF has free reign to access and book on Mahan Airways undetected under the pseudonym “Hamra Hamrah” we spoke about previously. They do completely bypass the civil aviation security measures that keep us safe and transport dangerous cargo and soldiers to QF dominant regions such as Damascus, Lebanon and the border regions. The hacking group has  since posted many more documents as proof of the deep cooperation between the airline and IRGC-QG on their Telegram channel.

Who is the Hooshyarane Vatan group?

In a type of manifesto the Hooshyarane Vatan group released on their Telegram channel that they are the proud people of Ahvaz who have for years been fighting against the oppressions and lies of the racist Islamic regime of Iran.

The group claims the Quds Force and its soldiers have been operating in their region and looting the land of its resources for years, taking everything of value from them and now the IRGC are targeting their Ahwazi culture and identity.

Mahan Airways and its historic links to the IRGC

For years the Mahan Airline has been publicly analyzed and investigated for its corrupt support of the IRGC Quds Force but the specifics of the cooperation have been well hidden.

According to Reuters the carrier was blacklisted by Washington in 2011 over the support Americans said it provided to the IRGC.