Freedom on the net report published for 2021

Iran has received second-last place in a report ranking the world’s internet freedom by country. The yearly report published in english by Freedom House, a pro democracy organization that identifies threats to freedom online has been released for 2021 and the report key findings has identified that global internet freedom declined for the 11th consecutive year and also that the scorecard of Iranian freedoms on the internet is still terrible and second only to China for systematic abuses of citizens freedoms online. 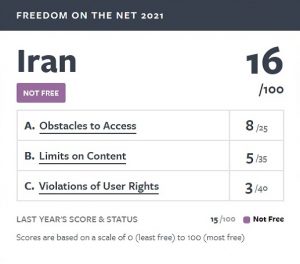 out of a possible 100 point to score based on the Freedom House scorecard Iran scored a measly 16 points which is actually a one-point improvement over last year as they gave an extra point to this years score as there was no nationwide or long-term shutdowns of the internet during this reporting period although readers will be all too aware of the many localized internet shutdowns that did indeed occur such as those during the protests in Khuzestan province in July 2020 and in Sistan and Baluchestan province in February of this year.

The scorecard is broken down into three sections labelled obstacles to access, limits on content and violations of user rights with several sub-categories in each section that we will explore in further detail.

According to Freedom House Iran scored most of its points in the obstacles to access category and most points in this category are awarded in the sub-section addressing access, speed and quality of internet connection. The report notes that internet penetration, bandwidth and speed has increased dramatically in recent years due to heavy government investment in information and communication technologies however the review becomes mostly negative after this. High costs of access and patchy geographical coverage as well as government control with intent to restrict connectivity dropped our scores significantly in this seection and the country received zero points in the diversity of providersi category as the telecommunications industry is tightly controlled.

Severe blocking and filtering of content as well as the use of legal force from the state to delete and filter material especially in regards to journalism, commentators and ordinary users has contributed to Iran scoring comically low in the category.

According to the report, authorities frequently employ administrative measures to force the removal of legitimate online content and anyone in this industry will know and understand this all too well. Self-censorship among journalists and other users is extensive, particularly around political issues.  Arrests and imprisonments of journalists, activists and ordinary citizens is common and acknowledge by the report. Our dear readers may remember the most distressing example of this in recent memory being the execution of Iranian journalist Ruhollah Zam who was hanged after being found guilty of “corruption on earth” due to his critical opinions against the regime expressed on his Telegram channel.

The only points scored in this section rely on the barely-intact premise that encryption – at least at the time of writing is not explicitly illegal in Iran. The legality of encryption in Iran is somewhat ambiguous, and because it is not outright illegal we have scored one point. This being so we also scored one point in the state surveillance infringing users’ right to privacy sub category. The logic goes that as we are still able o use encryption somewhat legally and if authorities cannot break the encryption then they cannot spy on us but this of course does not mean they do not try. This is a very poor argument but it is the sad state of online rights in Iran I am disappointed to say.

The publication is very focused on western ideals and western beliefs but it simply cannot be denied that freedom on the net for Iranians is awful. Anyone in the journalist profession in the country know this and accepts it as true. What is worrying is most of the countries Iran is engaging with politically and signing cyber deals are rated even worse than we are! China has ranked as the worst environment for internet freedom for the seventh year in a row and we are signing lucrative cyber deals with them, presumably giving them access to our data and communications in the process. Russia’s score is marginally better than ours but all are firmly rated in the “not free”category. The outlook for internet freedom is extremely poor and if the tools we use to keep our identity anonymous and our communications protected such as encryption do become illegal that would be the end of any type of safety for those operating in the online space in Iran.